(The Sunday Matinee has been canceled) 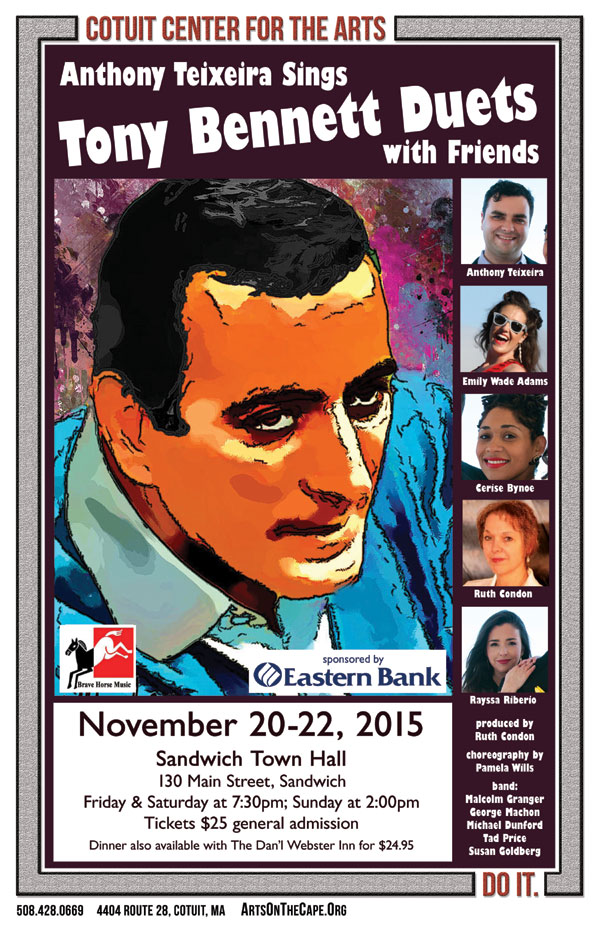 Tony Bennett’s career spans more than 60 years and with the help of his son, he has recreated himself bringing his music to a whole new audience. In 2006 to mark his 80th birthday, Tony Bennett released a duet album recorded with a collection of stars including Barbra Streisand, Elton John, Elvis Costello, Bono and Sting. The project proved to be such a success that he did another celebratory album in 2011 for his 85th birthday. His latest album “Cheek to Cheek” is a collaboration with Lady Gaga, and he has embarked on a world tour to promote the album.

Many of the songs chosen for this show are the standards that created Tony Bennett’s career and that he chose to re-record with other successful pop & Jazz singers as duets on several albums. “One of my favorite albums, “In Person Tony Bennett”, which was released in 1959, I listened to incessantly when I was in my early twenties and studying voice, said Ruth Condon. I studied every song on this album, as Tony Bennett’s phrasing is impeccable and it was a great music lesson. I have chosen 3 songs from this album.” “There is a total of 14 duets that Anthony shares with these talented female vocalist plus 2 solo performances in the show.”

Anthony Teixeira has been seen in many productions at Cotuit Center for the Arts, including “Company,” “Spamalot,” “Jacques Brel is Alive and Well and Living in Paris,” “Christmas in Cotuit,” “Cabaret,” “A Grand Night for Singing.”, “What the World Needs Now-A Musical Tribute to Burt Bacharach” & this past summer “The Last Five Years”.