Cotuit Center for the Arts

Cotuit Center for the Arts in partnership with the Glass Town Cultural District Presents “It’s a Grand Night For Singing: The Music of Rodgers & Hammerstein” in a special encore performance Saturday, March 9 at 7pm.

Melinda Gallant, of Sandwich, directs this musical revue of  solos, duets, and medleys from 11 shows, including all the big hits: “Oklahoma,” “South Pacific,” “The Sound of Music,” “The King and I,” and “Carousel,” and some lesser-known shows like “Allegro,” “ Pipe Dream,” and “Me and Juliet.”

“A Grand Night for Singing” opened on Broadway in 1993; it was originally presented cabaret-style at Rainbow & Stars at the top of Rockefeller Center. The musical tells a story through song; there is no dialogue, but the tales are familiar: “boy meets girl; boy loses girl; girl meets boy; boy finds girl; some girls are left out; some find true love.”

On the program are such favorites as “Surrey with the Fringe on Top,” “Honey Bun,” “The Gentleman is a Dope,” “If I Loved You,” Kansas City,” “This Nearly Was Mine,” and “Some Enchanted Evening.”

“This is marvelous music, beloved by all,” said Gallant, “and the arrangements are superb, very rich, harmonious, and beautiful to listen to. The show opens on Valentine’s Day, perfect for this music and this setting. It is all about love—love of music, love of people.”

“Henry Lee Buck, the music director is only 23, but he really knows his stuff,” said Gallant. Buck is a resident of Bourne and he will also be music director for the Falmouth Theatre Guild’s spring production of “The Music Man.”

This is Melissa Makarewicz Morin’s debut as a choreographer. “She has many innovative ideas and helping to make the show sparkle,” said Gallant.

Maria Marasco is the leading lady. A GED teacher at the county jail by day, Marasco is new to local community theater, but has, according to Gallant, “the most spectacular soprano voice—it just fills the theater. She is an unbelievably graceful actress, with great phrasing.” 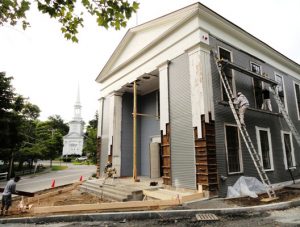 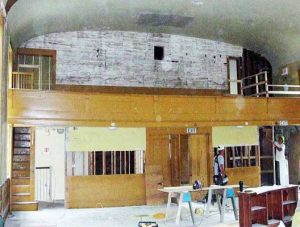 Major adaptive changes to ensure functional use were: raising the main granite entrance-way & installation of an elevator–for the handicapped and physically challenged; reconfiguration of first floor Town administration
office spaces; installation of new/additional toilets on both floors; installation throughout of multi-zoned heating & air conditioning, and complying with all ADA and Building Code safety requirements.
Major corrective changes included: new supporting piers throughout the cellar; covering, channeling, and suppressing cellar water intrusion; and a pair of enclosed steel “summer” beams to support the second floor Meeting Hall. 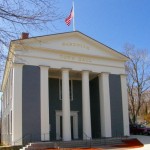 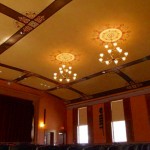 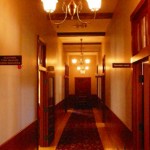 ing is open to the public with the first floor occupied by town administrative offices. Groups and individuals are invited to rent the town hall for non-political events.